Qobuz is a subscription-based music streaming service that provides lossless audio streaming. Subscribers can stream millions of losslessly encoded tracks to both Qobuz's own apps, as well as Roon.
The Roon + Qobuz is an experience far beyond Roon alone or Qobuz alone, as it allows you to navigate your own music without unwanted content cluttering up your experience while giving you the right touches of extra content exactly where you want them the most.

Roon will prompt you to add your Qobuz account on first launch, but you can always link Roon and Qobuz at any time from the Services tab of Settings. Click the navigation icon

at the top left of the Roon window, then click Settings, and open the Services tab. From here you can click Login to link your Qobuz account in Roon:

Here you can also set the streaming quality Roon will use for Qobuz content: 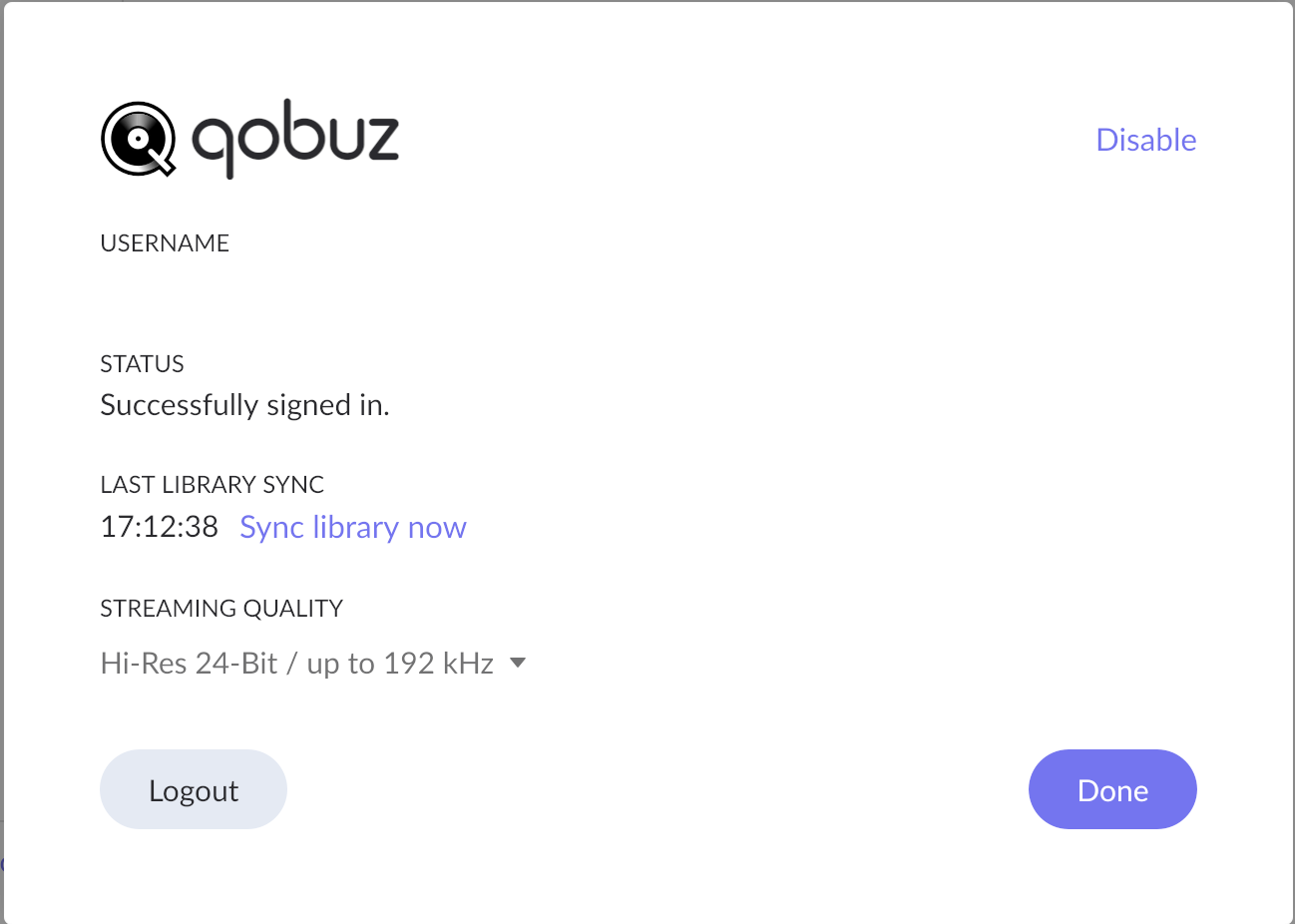 Browsing Qobuz and adding albums to your library

at the top left of the Roon window, then Qobuz. Here you can access the New Releases on Qobuz, Qobuz's Playlists, the "Taste of Qobuz", and "My Qobuz".
If you want to add an album to your library, just click it to open the album detail screen, then click+ Add To Library. This will add the album to your Roon library so it's accessible alongside your local albums, and add it as a favorite in the Qobuz client.

This screen is divided into sections:
If you're just beginning with the Qobuz service, then this screen will be blank, apart from one or two "Introduction to Qobuz" playlists that are automatically generated by the Qobuz service for you.
As you mark albums, artists, and tracks as favorites, they will appear on this screen in the relevant section. As your collection builds, you can scroll vertically to bring the sections into view.
In addition to streaming, Qobuz also enables the purchase of albums and tracks. This is done using the separate Qobuz app - purchasing albums and tracks is not built into Roon. The Qobuz apps for Windows and macOS can be used to download the digital files for importing into your Roon library. While the Qobuz desktop app can be set to download purchases directly into your library, we don't recommend doing this.
The reason is that downloading is a relatively slow process as far as Roon is concerned, so Roon sees the album gradually appear, and tries to make sense of what it’s seeing. The identification process can break as a result. The best practice is to download to a staging area outside of your Roon library Storage folder(s), and once complete manually copy the albums into your Roon storage folder(s), where Roon will proceed to import them into your library.

Why aren't the latest albums on Qobuz available in Roon?

When you're browsing Qobuz in Roon, you're seeing Roon's Qobuz database, not a direct pass-through of what's shown on Qobuz -- that's why there's so much more metadata, like recording dates, lyrics, links to composers, credits, etc.
This is also why Roon can sometimes be slightly behind Qobuz when a brand new release comes out -- our database is generated daily, but sometimes a new album will just barely miss the cutoff and will show up in a day or two.
When this happens you can add the new release directly in the Qobuz app. It will then appear in your Roon library.
Visit the Roon Community!
Need help? Thousands of Roon subscribers and audio enthusiasts are chatting over on our community site right now, join them! You don't even need a Roon subscription to sign up.
Start a topic