Sometimes Roon encounters a file that looks like it should contain some audio or artwork, but is unable to import that file into your library. You can see a list of files using the "Skipped Files" feature, accessible via Settings: 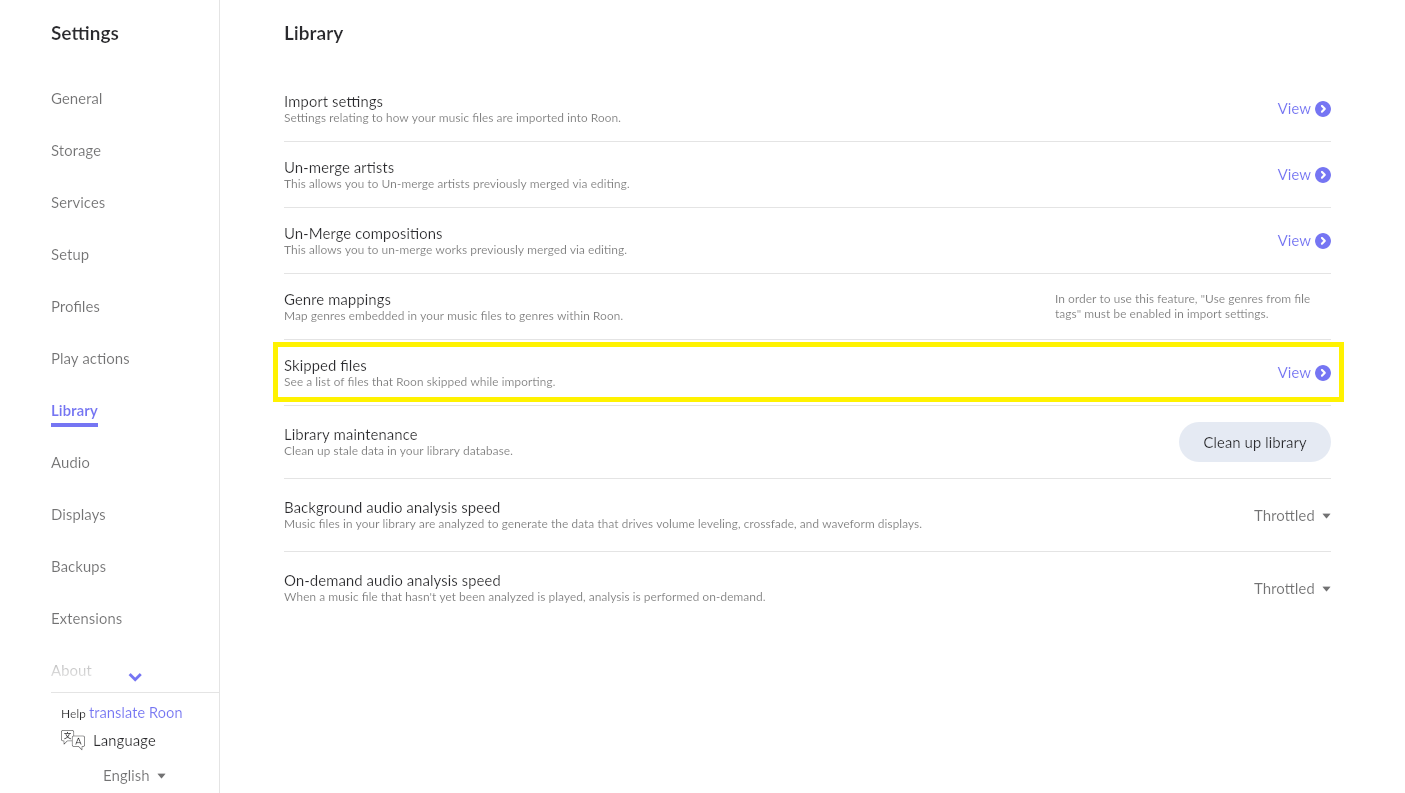 The Skipped Files feature is designed to help you find out if media files are missing from your library, and to find out about files that were skipped during the import process.

Why are Files Skipped?

If a file is listed in Skipped files, that means that these three conditions were met:
This is the list of reasons why a file may show up in Skipped Files:

Which files are *not* listed in Skipped Files?

It is possible that there are some files that are in your folders, and not imported, but without showing up in the Skipped files list. This generally happens for one of two reasons:

Roon's importing process is based on automatic folder scanning, so some system files, hidden files, and temporary files are automatically skipped. In some cases, descending into these folders can cause stability issues or confusing results, so this is important to ensure cross-platform compatibility and stable operation.
The following folders will be skipped by Roon:
In Addition, Roon supports user-configurable Ignore Patterns for folder names. These can be changed by selecting the Edit option in Settings -> Storage -> three dots menu for a watched folder. These patterns are not case sensitive, but do use the directory separator specific to your operating system (`/` on Mac/Linux, `\` on Windows). By default, every watched folder is created with patterns to ignore the following:

Roon was unable to access this file, or an enclosing directory, for reasons beyond its control.

There are other reasons why Roon may be unable to see a file, for example:

Avoid using "special" characters in the names of files and folders. Using these characters may render the files inaccessible under some circumstances, particularly if files are transferred between different platforms, or viewed over a network share.
< (less than), > (greater than)
: (colon - sometimes works, but best avoided)
" (double quote)
/ (forward slash)
\ (backslash)
| (vertical bar or pipe)
? (question mark)
* (asterisk)
$ (dollar sign)
` (backtick)
~ (tilde)
Sometimes the presence of one of these characters causes Roon to be unable to "see" a file or folder in the first place. Files skipped, for this reason, do not (and can not) show up in the Skipped files list, since it may not even be possible for us to know their name.
Ask the Roon Community
Thousands of Roon subscribers and audio enthusiasts are chatting over on our community site right now, join them! You don't even need a Roon subscription to sign up.
Start a topic
Something you can't find?
If you're still stuck, don't hesitate to let us know and we'll get back to you as soon as we can.